What’s Love Got to do With It? 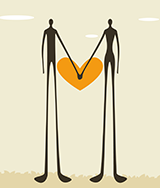 Women in I-Track were more likely than men to report their regular sex partner was the person with whom they had most commonly injected drugs in the past six months (44% versus 25%).

Women in the same study were also more likely than men to have injected with a used needle and/or syringe in the past month (20% versus 14%).

How is vulnerability to hepatitis C and HIV created in intimate relationships?

Building intimacy and trust in the context of drug use

Intimate heterosexual relationships, where both partners inject drugs, can result in vulnerability for women to hepatitis C and HIV, but such relationships can also build resiliency where partners experience caring, trust and mutual support.2

Within the context of intimate relationships, using drugs together can have important emotional meanings. For example, sharing needles and other injection equipment within the relationship can create intimacy, emotional connections, trust and commitment.5 Many couples have rituals about who plays what role in acquiring, preparing and using drugs. These rituals can be one way for a couple to build and sustain their relationship.2

For some women who don’t inject drugs but have a partner who does inject, the desire for closeness can lead to a shift to injection drug use with her partner.2 While this can lead to a feeling of greater closeness it may also lead to needle sharing and a decreased concern about health risks such as HIV.5

Injecting together to protect each other from harm

As well, some women who don’t know how to inject themselves may feel safer having their partner inject them rather than another person to ensure they have a less damaging injection.5

While some of these strategies may offer a measure of protection, they may also increase risk in some circumstances. For example, if one partner has HIV or hepatitis C and doesn’t know it, then there is a risk they may pass the infection(s) to their partner.

Control over drug use and condom use

Partner abuse is defined as when a partner in an intimate relationship uses a pattern of psychological, physical and/or sexual coercion to have power and control over their partner.7 In intimate heterosexual relationships where both partners inject drugs, one-way relationships can become abusive if access to drugs and injection equipment is controlled by the male partner.5 In these relationships, a woman may have limited control over getting, preparing and injecting drugs, and how the sharing of equipment or drugs happens.5 Women are also less likely to use harm-reduction services than men.8 This makes women less likely to have direct access to new drug use equipment and harm-reduction support that might enable them to be more independent in their drug use.

For many women, their first time injecting drugs is with an intimate partner who injects them.5 If a woman does not learn how to inject herself, she will be dependent on other people to inject her. Women in this situation run the risk of being injected with a needle that has already been used (also known as being “second on the needle”),5 creating the potential for hepatitis C and HIV transmission. When a woman is experiencing symptoms of withdrawal and also needs someone to help her inject, this may make it challenging to request the use of new injection equipment.

There are other forms of control and abuse that can happen within intimate heterosexual relationships where people inject drugs. Examples include a male partner preparing a smaller amount of the drug for his partner than for himself, not giving her drugs so she experiences withdrawal, and trying to get his partner to be more dependent on the drug so he has more control. 9

Relationships may not necessarily start out as abusive but may become more abusive over time. For example, some women report that their relationship with their partner shifted from a traditional partnership to one where their partner controlled many aspects of their life. This included limiting access to condoms for sex work, and to drugs and injection equipment. As a result, the women’s ability to control safer sex and injection practices was restricted.10

Violence or the threat of violence is a significant contributor to HIV and hepatitis C vulnerability among women who inject drugs.11,12 This violence is often exacerbated for women who are living on or close to the street or who experience other forms of discrimination, such as women who are Indigenous, transgender, racialized, disabled and/or work in the sex trade.10,13

For women who experience poverty and homelessness, this violence can be so frequent that it becomes normalized,14 sometimes to the point where it is no longer perceived as violence.9 In some places, the street culture creates and perpetuates violence by devaluing women and limiting the roles they can take to gain respect and resources.13 This violence can include robbery, physical abuse, rape, threat of child removal by child protective services or arrest. Surviving these threats competes with and can take precedence over HIV and hepatitis C prevention.13

The prevalence of intimate partner violence (IPV) is three- to five-times higher for women who use or inject drugs compared to women who don’t use drugs.5 There are some theories for why IPV is higher for women who use drugs. Certain drugs like crack, cocaine, amphetamines and benzodiazepines are linked to an increase in violence and aggressive behaviour, although there is debate about whether drug use causes violence or if drug use and violence are linked together by other factors.15 Another theory is that using drugs in a society in which they are criminalized creates a climate of stress that facilitates violence where people who use drugs experience desperation about acquiring drugs, fear of arrest, and a lack of legal ways to resolve drug-related disputes.9,15 Another perspective is that women who use particular drugs, such as crack, are perceived to have a low social status, which may mean some partners feel more entitled to abuse.16

In abusive intimate relationships, women who inject drugs may be threatened with violence if they don’t share needles or have condomless sex. Having previous experience with IPV may also make it challenging to request condom use or to refuse to share injection drug use equipment for fear of being exposed to more violence.5

Among women who use drugs there is a high prevalence of mental health issues, in particular post-traumatic stress disorder (PTSD), which is often connected to experiences of physical or sexual abuse. Some women may use drugs to cope with the difficult symptoms of PTSD.17 Many women who use drugs may face violence from multiple sources, which impacts their health and wellness and ability to engage in safer drug use and sex.

What can service providers who work with women who inject drugs do?

People working with women who inject drugs play an important role in supporting women to learn about effective harm-reduction strategies, such as the use of new injection equipment, condoms and pre-exposure prophylaxis (PrEP). Service providers can also support women who inject drugs to get tested for HIV and hepatitis C, and/or linked to care and treatment if they are living with HIV and/or hepatitis C.

Service providers can also offer HIV and hepatitis C prevention counselling or link women to additional services to support them to address vulnerability to HIV and hepatitis C, and any underlying issues linked to substance use, such as trauma, past experiences of abuse, mental health issues, child custody loss or alcohol use. They can help support access to or link women to services and resources that will enhance women’s overall health, such as income supports, housing, and access to food and health services.

There are many things programs can do to make their services more accessible to all women who use drugs, such as:

To learn more about couples HIV testing and counselling see:

Views from the front lines: Couples testing and counselling

Acknowledgments: Special thanks to Sheryl Jarvis and Kate Kenny for providing invaluable insights on a draft of this article.

Scott Anderson is CATIE’s hepatitis C researcher/writer. Prior to working at CATIE, Scott was a research coordinator at the Centre for Addiction and Mental Health, where he led studies examining healthcare access for marginalized group